Sorry I have been out of the loop for so long. I will give you a short rundown of my last two and a half years. I regretfully have to admit I married some one I should not have...And what is worse is, I can not explain my actions. He relocated me to Florida supposedly to be near his mother, what I later found out was, it was to be closer to his crack dealer! He was a narcissist and a pathological liar...And in my vulnerable state of mind, I fell for the lies; hook, line, and sinker. And unfortunately I paid a dear price for not seeing the HUGE red flags waving in front of my face.

He disappeared for days on end, took all the money, and left me with nothing. He ran up all my credit cards, with a promise to pay them off, you can guess how that went. Then on June 9th, 2017, he viciously beat the crap out of me, he hit me, dragged me around by my hair, threw me against a metal filing cabinet, and shook me by my arms so hard I had bruises for two months. I am not telling you this for pity, It is to make people aware that abuse happens. I never thought he would hurt me like that but it happened and it nearly broke me. But the victory in this story is, he did NOT!

I realized I was on my own, I went and got two jobs and waited patiently. In January of 2018, he went on an eight day bender, I changed the locks. The lease was up in a week and when that time came, it got changed to just my name. I started the divorce in February, and by September it was finished and I had freed myself from the crack addicted, abusing monster he had became or better said, probably always was.

There are multiple blessings to report though, in the midst of hell, I am always looking for that slice of Heaven. I met my current partner in all that mess. His name is Larry and he used to live across the street but had moved away. He came back one day to visit my neighbor and I also happened to be visiting with the same neighbor. It started with a friendly motorcycle ride and turned into more than either of us ever expected. He had met me during my marriage, and had noticed that I hardly came out of the house and that I rarely smiled. Also, I have made my own friends through work and rediscovered my inner spirit. A spirit that refused to be broken and rose up to help me through my troubles. Through losing myself, I have found myself. I have been painting as a means of calming my anxieties. I will be sharing my paintings here and eventually I will be selling them once they are framed.

I hope by sharing my experience, strength, and hope that I will encourage someone else who may be facing insurmountable odds and teach you that you do have it inside of yourself to survive and overcome.

Popular posts from this blog

- November 05, 2019
*******ATTENTION*********************** I want to let you all know that I am changing my blog over to WordPress. I had to make the decision to grow my following and get better exposure to get my message to more people. Please come with me. I would love it if you all followed me to WordPress and I want to thank All of you for years of being such Loyal followers... I love you all. Blessings 💜🦋💙 http://laurasuegutierrezpoetry.wordpress.com
Read more

- November 02, 2019
Ever think what the hell is the sense in trying anymore?  That was my whole week. In July I had a motor vehicle accident that I can not discuss because there are attorneys involved but just know I was sitting at a red light minding my own business.  This has drastically changed my life, I am constantly in pain.  This week has been crap for me...I actually entertained the idea of ending it all so I am not a burden on anyone. I am feeling like a failure lately. This depression is wreaking havoc on my life.  I pray everyday. I get up, show up, and paste a smile on my face. But that is not how I feel. I am hoping my smile will force my brain to think it is happy. It did not work.  My boyfriend Larry asked me what was wrong the night I was thinking of ending it all and my heart just literally split in two and the tears came. I reassured him that I love him and let him know that he changed my life. You know, just in case something "happens".  It is not fair to hi
Read more 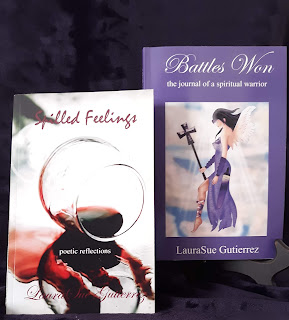 LauraSue"Poetry"Gutierrez
My name is LauraSue. I have been writing and painting since I was a child and it consumes me. Mental Health Advocate. My favorite color is Purple. I am a grandmother. I am a Christian. Social media accounts: Facebook, Instagram, Blogger, Twitter, and YouTube. You can see my Author page on Amazon at Author Central.